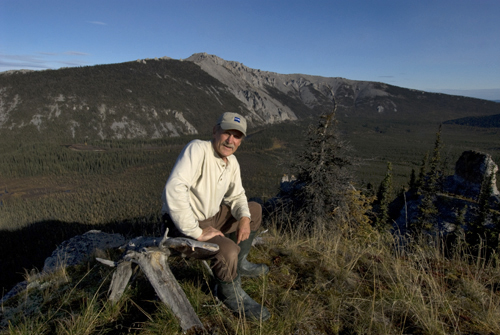 I grew up in the north woods around Lake Superior. In high school, I fantasized about heading down some northern mountain valley to become a mountain man living off the land. I never became a mountain man. Instead, I naively decided to become a wildlife photographer. After hunting with a rifle, I discovered, with my camera, I could hike into the woods and shoot the same animals over and over; that was so much more satisfying.

During the decade of the 1980’s, I traveled worldwide doing thirteen photographic assignments for the National Geographic Society. I’ve been to the African Plains, the Equatorial Rainforest of Costa Rica, the Outback of Australia, and completely across North America—from eastern Canada’s Arctic, throughout Alaska and south into most of the United States.

My early photography took various directions. It began with two years of 16mm short nature films for Sesame Street. From there I moved into still photography, ultimately touring with the Rolling Stones rock group as publicity photographer and later doing fashion photography for Vogue and Cosmopolitan.

A variety of natural history assignments from Time-Life, Audubon and National Wildlife magazines enabled me to pursue my love of wilderness and large mammals. I’ve worked as publicity photographer for the Walt Disney movie, Never Cry Wolf, spent over two years following mountain lions for German GEO magazine and recorded the continued demise of African wildlife for Newsweek.

My photographs have appeared in myriad advertisements for liquors, fashion products, environmental companies and have been published in all major natural history publications worldwide. In addition, I have received both Picture of the Year and Wildlife Photographer of the Year awards.

During the decade of the 1990’s I did five coffee table books. The first book, titled Diary of an Arctic Year, was written and photographed by me, and was released by Lorraine Greey Books of Toronto, Canada; it covered my travels from Greenland across Canada and Alaska out toward Russia. My second book, Preserving Eden: The Nature Conservancy, was published by Abrams of New York and is my photographic coverage of The Nature Conservancy conservation organization’s natural preserves.


The third book, TRUE NORTH: Diary of a North Country Year – is a companion volume to “Arctic Year” and covers the Northern Forest of North America. This book was published by NorthWord Press of Minocqua, Wisconsin.

My fourth and fifth books were also published by NorthWord Press. Way of the Whitetail celebrates the Whitetail Deer in all seasons across North America and African Wildlife compiles four of my safaris into a natural history journal from East Africa.

For the past fifteen years, individual calendars of my photography have been published annually by Pomegranate Press, Firefly Books and NorthWord Press on various subjects including North Woods Wildlife, North American Wildlife, Red Fox, Wolves, Bears, Whitetail Deer, Images from the Northern Forest, and African Wildlife.

For the past number of years I’ve been balancing my creativity between photography and oil painting.


Show all images of this contributor