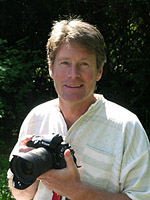 Chris Cheadle is a professional photographer based on Vancouver Island. His photographs are published around the world in advertising, books, magazines, calendars and an array of other media. His images have appeared in National Geographic, Canadian Geographic, Sunset, GEO, Conde Nast Traveller, Sunset, British Columbia Magazine, The London Times, and MacLeans to name a few. Chris’s projects which have taken him across Canada and the United States, to  Asia, the South Pacific, Central America, Alaska and througout Europe.

Chris’s most recent book of three, “Canada’s West Coast” showcases the natural splendor of the landscape, wildlife and culture of the British Columbia coast.

Chris is the founder and president of All Canada Photos Inc. He continues to advocate on behalf of photographers and is convinced that professionalism will always maintain a following with quality minded businesses and designers.